'In any land what is there more glorious than sunlight! Even here in the desert where it falls fierce and hot like a rain of meteors, it is the one supreme beauty to which all things pay allegiance ... The chief glory of the desert is its broad blaze of omnipresent light.'
-John Van Dyke

Elf owl in nature and craft


Last Saturday I visited a Bugging-Friend from the East Coast at his rented casita in Madera Canyon. While waiting for bugs to arrive at our black lights, I was drawn to a group of birders who watched the top of a power post across the street: at ever shorter intervals  small round head appeared in a woodpecker hole. A juvenile Elf Owl who made low 'scolding' noises to express his inpatients and hunger.  Everybody was waiting for the arrival of the parents to deliver food. I was worried that the little crowd of birders with their lights would disturb and inhibit the birds. But I was assured that this was the ninth year of  successful breeding in that hole with similar crowds of birders in attendance. If ever birds were habituated, it was this pair of Elf Owls. So maybe it was the scarcity of insects that slowed the birds down? Madera Canyon is a Mecca for entomologists because insects are so divers and plentiful here, but the drought has been severe  and beetle numbers were very low compared to other years. Consequently, another insectivore, the Elegant Trogon, seems to have shown up in very reduced numbers for this 2021 breeding season.

But there was another option, and that proved to be the case here:  raptor parents seem to use  the hunger of their nearly grown brood as a strategy to tease the fledglings out of the nest. I have watched several species of Falcons and hawks do that routinely. At this nest, I missed the great event, but my new acquaintance Melanie was so kind to send me some of her excellent photos later.

Incidentally, Elf Owls had been very much on my mind for a couple of weeks. I had used the enforced isolation of the COVID year of 2020 to learn a new arts and crafts technique, sculpting in papier-mâché and my latest project had been an Elf Owl.

Papier-mâché is a very old and traditional medium for sculptors and appeals to me because a lot of recycled material can be used. I follow the papier-mâché clay recipe by Jonni Good  I learned most of the technique from her excellent videos and blog.

I began by closely studying the characteristics of our smallest owl on scores of images I pulled up from the internet. The most striking characters besides the diminutive size are the big head, short tail, and prominent white eyebrows.

Whether you use traditional newspaper strips with flour-paste or the PM Clay that I prepared, you have to base your sculpture on a firm armature, in this case balls of newspaper held together with masking tape, plus some cardboard details like beak and wings. Papier-mâché clay is then added like the icing on a cake.
Texture and some additional bulk can be build up by applying several layers of the clay - I let it dry in between because it does shrink somewhat. I had added a cardboard mask for the facial features of the owl, but I removed that later.  I used reverse painted glass cabochons for the eyes. I paint those myself and tried out several sizes, going for a slightly large version which seemed most appropriate for an owl.
I added volume and the texture of feathers to wings and the stubby little tail. .  .
The skin of papier-mâché clay hardens extremely well without becoming brittle. Paper fibers, glue and chalk from joint-compound form something very similar to a strong polymer that can be carved or sanded. A porcelain-like finish can be achieved with additional thin layers of joint-compound. But for my birds and other animals I like the slightly rough appearance that the paper fibers provide. 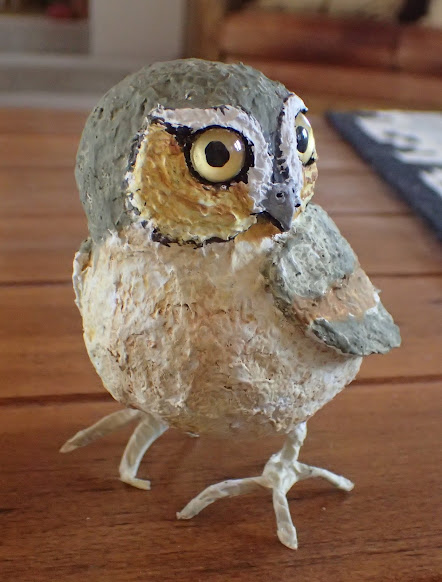 To give my bird some color, I use Acrylic paint.  But as a watercolor painter, I have my problems with the uncompromising opacity of Acrylic paints. 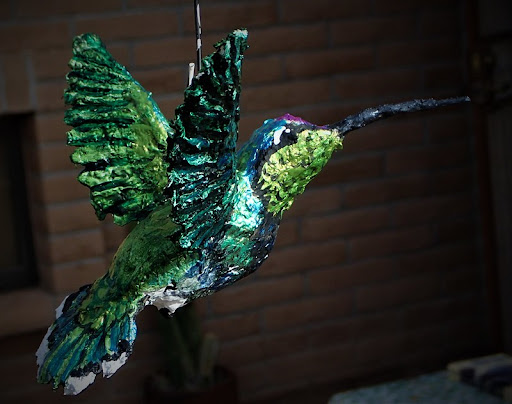 Before I tackled the owl, I produced a long series of hummingbirds, using metallic paints over the original coat of opaque colors. I first found the results shocking and nearly tacky. but eventually felt that the metallic accents were breaking up the heavy, dead, acrylic layer in a very pleasant way and certainly appropriate for the brilliance of hummingbird plumage. 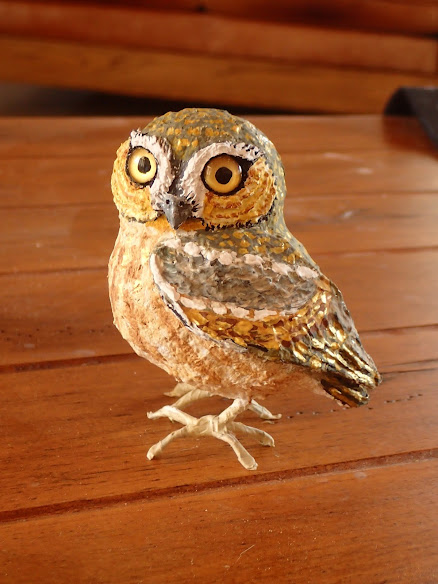 Owls are of course rather camouflaged and cryptic to be able to sleep out in the open during daylight hours. But after painting all those hummingbirds I liked those metallic accents.  The grayish patches on head and back of Elf Owls are brightened by light, nearly golden tips of many contour feathers. So I took the artistic freedom to use little dabs of metallic paint to add those brighter spot. I think it nicely pulls the different areas of plumage together and goes well with those big golden eyes.  If it gives the whole sculpture a little jewel-like appearance, so be it. It's the Elf in my owl.

At this point the legs of the owl were still flexible and unfinished because I still had to chose a base to anchor it to. Right then I got an invitation to submit a piece for the Dia del los muertos exhibit of Tohono Chul Park. Some time before, the creosote and palo verde bushes along Picture Rocks Road were suddenly studded with dozens of small plastic skulls. The meaning, if there was one, was unclear. Was it a macabre joke? Was it to commemorate migrant deaths in the desert?  Was it art? Litter? It was clear that the rangers of Saguaro National Park would not tolerate those decorations and remove them quickly. So I stopped and took a couple of them home where they rolled around in a box of found objects that may become part of an art project. 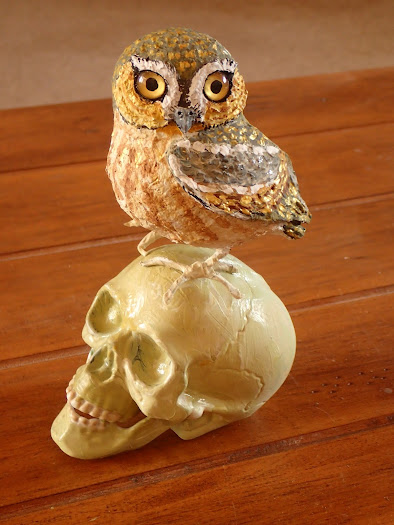 So now the little owl landed on one of them. Was this assemblage a fitting contribution for the exhibit? For me it was just a whim, but I did put it up for discussion to friends and fellow artists. The very numerous responses ranged from enthusiasm and the suggestion to replace the realistic skull with one that would be more in line with stylized Mexican sugar skulls, to philosophical thoughts - here sits the symbol of wisdom on an empty human scull, doubts about cultural appropriation, warnings that pre-Columbian cultures related the owl to very negative aspects of death and witchery, to the rejection of popular culture's fascination with skulls  ... It was quite interesting.  I myself was mostly reminded of the juxtaposition of life and death in the art of my own European culture where the skull has been a common element at least since the renaissance.  But I would not have submitted a piece to an art show that was half made up of a prefabricated plastic object, even though I liked the 'found and recycled' aspect of it. 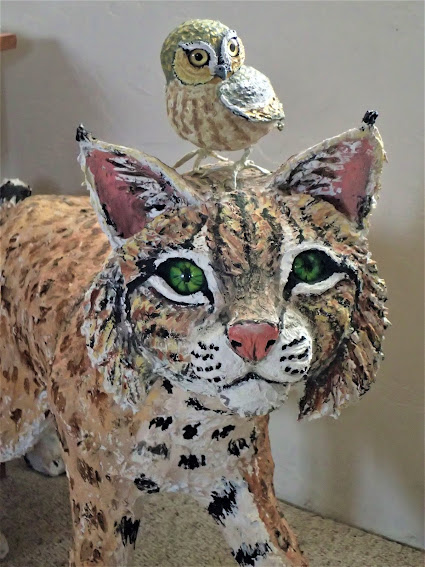 For now Elf Owl has landed on the head of my first PM sculpture, the life-sized but cartoonish Bobby Cat. There he is waiting for me to come across the right piece of Cholla wood as a permanent base.

Posted by Margarethe Brummermann at 1:41 PM

On this site, I will announce upcoming events like our popular out-door art shows and other exhibits, open studio invitations, new paintings and printing projects, and maybe in the future some new art classes.

On additional pages you will find samples of themed collections of paintings, and my latest favorite, bold, decorative collages of insect photographs. All of these pages will have links to flickr sets that show my entire collection of watercolors and photo collages.

Some originals are available for purchase. Giclee reproductions on paper and canvas can be ordered in several sizes. Please see details in comments of the flickr sets.


I also invite you to visit Arizona Beetles, Bugs, Birds and more, my nature blog

Margarethe Brummermann
I am a biologist, watercolor painter, and photographer originally from Dortmund, Germany. In 1995 I founded my business, Brummermann's Art and Sciences in Tucson, Arizona. Through this venue I am selling my original watercolors and insect collages, offer services like high quality art printing (giclee) art classes. I offer naturalists' presentations on many topics, I prepare and design and graphics for scientific publications. You can license my photographs. I collect Arizona insect specimens upon requests for scientists and researchers. I offer guided, very personalized tours to exciting natural areas in Arizona. I am producing a photographic field guide to Arizona beetles with co author Arthur Evans. For this purpose I have collected, identified and photographed (life) over 1800 Arizona Beetle species. I am still searching for additional under-writers to help finance this project and will start a crowd funding campaign soon.