'In any land what is there more glorious than sunlight! Even here in the desert where it falls fierce and hot like a rain of meteors, it is the one supreme beauty to which all things pay allegiance ... The chief glory of the desert is its broad blaze of omnipresent light.'
-John Van Dyke

I used to paint hundreds of rocks - making them into cats and wolves and rattlesnakes and selling them at art fairs. But when we moved away from the beach in CA, finding smooth pebbles became difficult. Carrying them to art fairs also became a real drag. My greatest problem: I'd spend every minute between shows on replenishing my inventory, with no time left for serious painting and no option to make any prints. So I gave up on this venue, even though the rocks were still selling like the proverbial hot-cakes. But Facebug brings up old memories and my fb friends saw pictures of old rock pets. So requests came in. But they were not for generic cats or wild-life, they were requests for portraits of individual dogs. I should have thought twice about that challenge. But one pair of dogs was super cute and the photos were usable. So I found a rock in our backyard and started sketching: 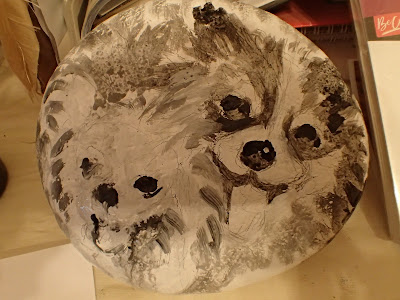 After the first dog, the Pomeranian Jazz, was painted and I liked him, I was afraid that the second portrait as sketched would destroy the first. Luckily acryllic paint is forgiving, so I whited out the sketch and turned the little face. 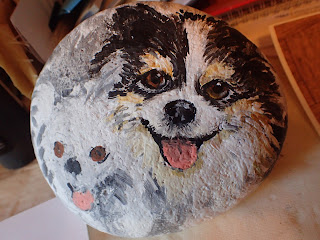 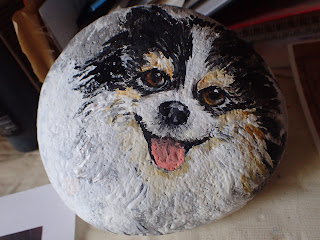 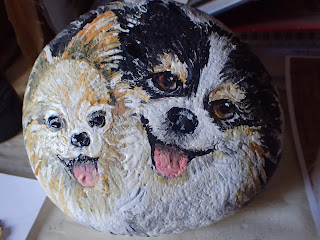 After fleshing out Molly's little Papillion Face I liked the outcome, even if one has to look at them from 2 different angles to do them both justice. That's the curse of a curved surface. 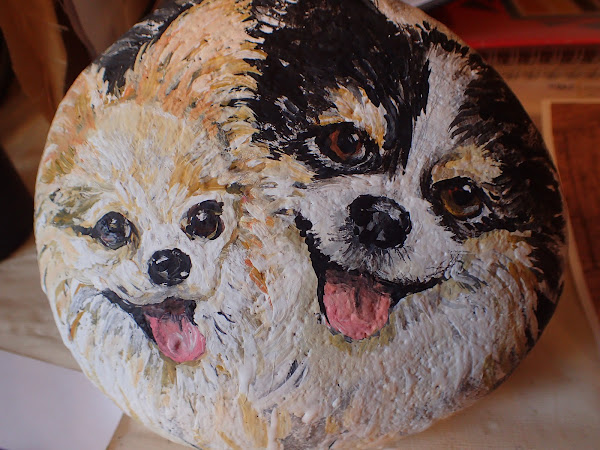 Most importantly, the owner loves it. Success! 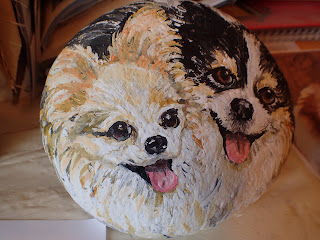 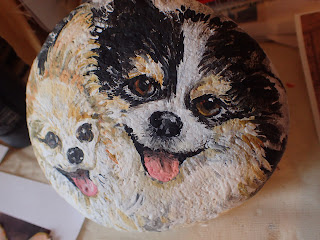 Posted by Margarethe Brummermann at 1:01 PM

On this site, I will announce upcoming events like our popular out-door art shows and other exhibits, open studio invitations, new paintings and printing projects, and maybe in the future some new art classes.

On additional pages you will find samples of themed collections of paintings, and my latest favorite, bold, decorative collages of insect photographs. All of these pages will have links to flickr sets that show my entire collection of watercolors and photo collages.

Some originals are available for purchase. Giclee reproductions on paper and canvas can be ordered in several sizes. Please see details in comments of the flickr sets.


I also invite you to visit Arizona Beetles, Bugs, Birds and more, my nature blog

Margarethe Brummermann
I am a biologist, watercolor painter, and photographer originally from Dortmund, Germany. In 1995 I founded my business, Brummermann's Art and Sciences in Tucson, Arizona. Through this venue I am selling my original watercolors and insect collages, offer services like high quality art printing (giclee) art classes. I offer naturalists' presentations on many topics, I prepare and design and graphics for scientific publications. You can license my photographs. I collect Arizona insect specimens upon requests for scientists and researchers. I offer guided, very personalized tours to exciting natural areas in Arizona. I am producing a photographic field guide to Arizona beetles with co author Arthur Evans. For this purpose I have collected, identified and photographed (life) over 1800 Arizona Beetle species. I am still searching for additional under-writers to help finance this project and will start a crowd funding campaign soon.